Enter your City name or Pincode

Jubbal is beautiful hill town located close to Shimla, at a distance of about 90  km. This town is situated on the banks of the Pabbar River and at 1901 meters above sea level. This place is very well known for its apple orchards and Jubbal Palace. All you get to see in Jubbal is dense deodar tress, apple orchards and thick woods

Jubbal doesn't have  many tourist place to see but the apple orchards, Chander Nahan lake and above all, Jubbal Palace makes it up for Jubbal as a tourist spot.

This lake is located at the base of the Chansal Range called Chander Nahan. This lake is extremely beautiful, however , reaching this lake is a big task. You can actually trek to reach this lake. Fishing is also quite popular at this lake.

Jubbal palace is the major attraction of Jubbal with Kuper Peak as its backdrop. This  palace is located on the banks of the river Bishkalti. This swiss castle looking like  palace was the home of former Royal family of Jubbal, however now it has been converted into a hotel and heritage building. Make sure to spend a night in this palace and have the feel of being in Switzerland. This palace is beautifully located in the midst of hills and has an architecture which is a blend of Europe and India. 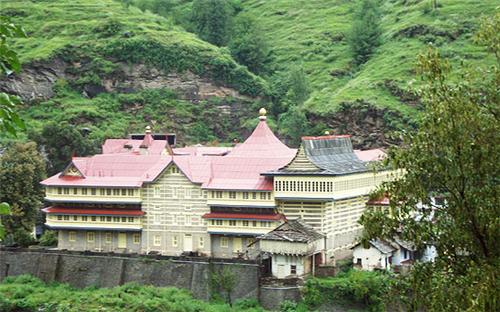 This palace has sloping roofs, red chimneys, masonry walls, cream-coloured façade and wooden galleries made using deodar wood. However, the use of wood proved bane for the palace as it caught fire in 1960's. The Jubbal Palace that you see today is in its near original form, thanks to steady restoration work.  The new modern wing that is built  is a blend of European & local design with intricate wood carvings. This Palace also has a display of armory including swords , muskets  and cannons. This palace will take you to the world of dreams and fairy tales.

You can also have a look at the Khara Pathar in Jubbal, which is named from an egg-shaped boulder. This stone is at a height of 8770 feet. Don't forget to see apple orchards in Jubbal. Also you can hire a jeep to Giri Ganga temple which is just 7 kms away from Jubbal. Hatkeshwari mandir in Hatkoti is also located at a distance of 20 km.

Jubbal palace is a heritage hotel in Jubbal and it is worth to spend your holiday in this palace. Other affordable hotels are also available which are listed below. Hotels in Jubbal are as follows

Jubbal Hatti airport in Shimla is the closest airport to Jubbal. This airport has many flights coming from Delhi  after which you can hire a cab for about Rs 2000. For all the International travelers, they can take a connecting flight from Delhi International airport.

The nearest railway station to Jubbal is Shimla, which is located at a distance of 90 km from Jubbal.

There are many state owned buses that connect Jubbal to Shimla, Hatkoti and many other places.

Jubbal will please you with its beautiful weather, scenic dense deodar trees and apple orchards with Jubbal palace just adding to the charm of this small town in Himachal Pradesh.

Are you a Business Owner?

Add the products or services you offer